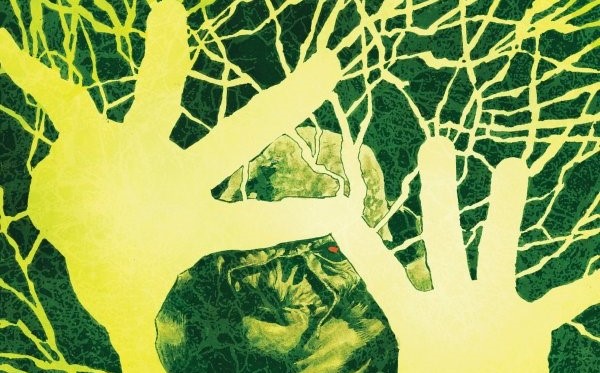 With my new work schedule known, I can no longer do a Saturday Showcase.  So, with that said, I am now going to do a Sunday Showcase instead.  For my first Sunday Showcase, I am posting about a character I saw in the trailer for She-Hulk: Attorney at Law.  Now, some comic fanes are arguing if the character is Leap-Frog or the Frog Man.  Well, by his build in the trailer and the synopsis for the show, I believe it is the villain known as Leap-Frog.

Leap-Frog aka Vincent Patilio was created to be a Daredevil Villain by Stan "the Man" Lee & Gene Colan back in the '60s.  A former toy inventor, Vincent Patilio set out to make some money by embarking on a criminal career after he created a pair of electrically-powered jumping coils. He was not the best career criminal, but he was a force to be reckoned with.  He first appeared in Daredevil #25 back in '66.  He was honored that such a note-worthy hero was on his tail, but the honor would soon be replaced with regret when Daredevil captured him and had him arrested. 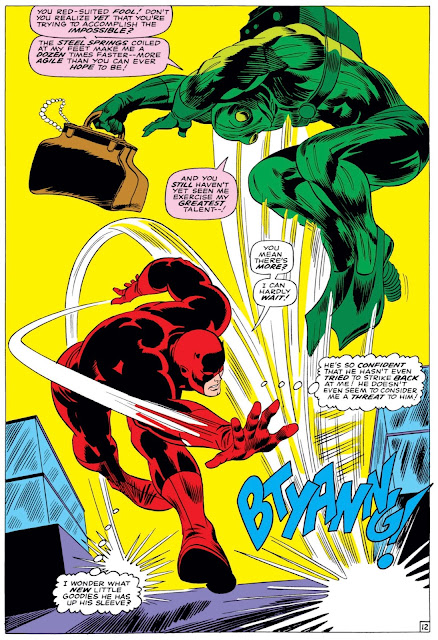 Daredevil was not the only hero that he would face,  He teamed himself up with some Iron Man villains under the employment of Justin Hammer who wanted Iron Man and Tony Stark dead so that his company could take over Stark Industries.  However, Iron Man had other plans. 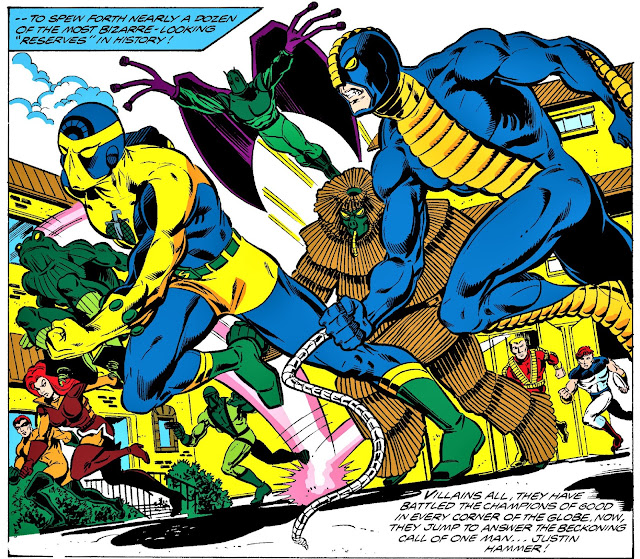 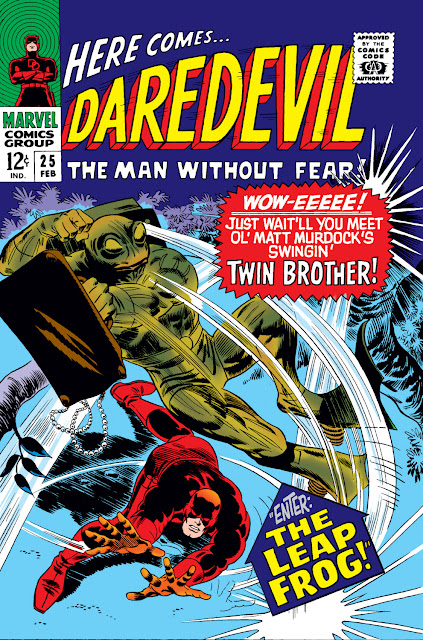 Until next time, get your READ on!
Posted by Derf's Domain at 1:55 PM No comments: 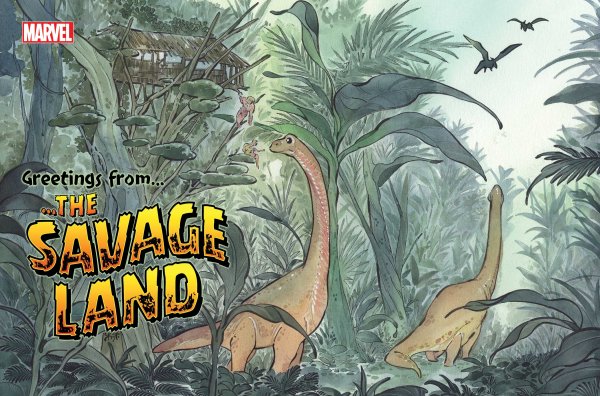 Posted by Derf's Domain at 9:07 PM No comments:

Before the lovely May Calamawy  played Layla El-Faouly aka the Scarlet Scarab in Moon Knight , there was another.  In fact, there were two others.  The Scarlet Scarab has a rich history in the Marvel Universe and it is a shame that some of you don't know it, until now.

The second Scarlet Scarab first appeared in Thor #326 (One of my favorite Thor titles as a child), and was created by Doug Moench and Alan Kupperberg. He also received an entry in the original The Official Handbook of the Marvel Universe #9. 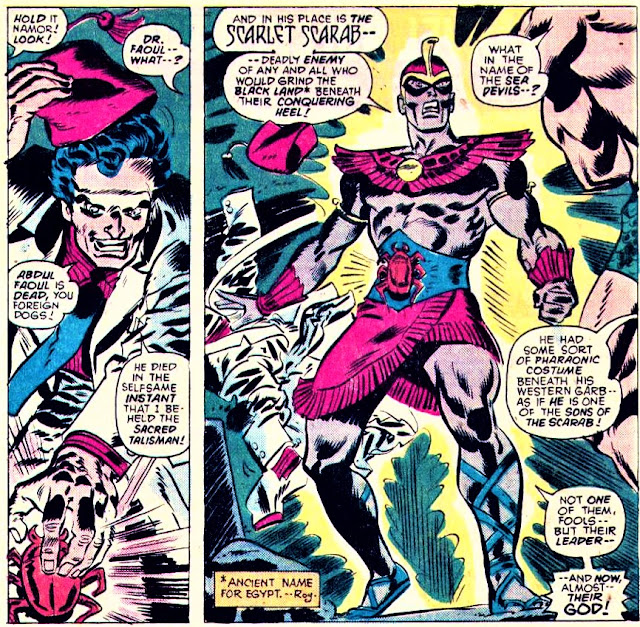 Abdul Faoul was a famous archeologist during World War II. He unearthed the Ruby Scarab, an artifact that was originally created to battle the Elementals, around 3500 B.C. When Dr. Faoul touched the mystical power-object, he became the Scarlet Scarab and became a champion of Egypt during World War II.

Dr. Faoul worked as a liaison between the Allied Forces and the Egyptian government, and led the Human Torch and Namor to a recently excavated pyramid in search of the fanatic nationalist group, the Sons of the Scarab. Faoul, who was actually the leader of the Sons of the Scarab, tricked the heroes into opening the vault where the fist-sized ruby was kept. As the Scarlet Scarab, he first ousted the British, and then the Nazis, from Egypt. Following the war, the Scarlet Scarab continued to battle criminals until one day in the 1950s, the ruby simply disappeared.

Dr. Faoul continued searching until his death. As his dying act, he requested his son Mehemet to continue his quest. 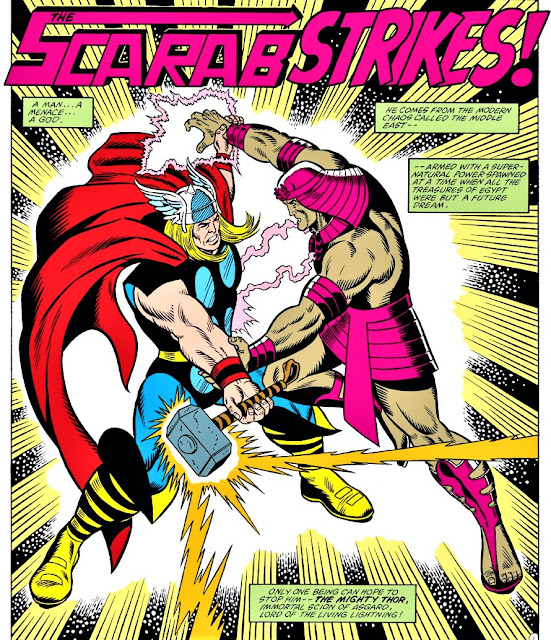 Mehemet received from his father the strongbox in which he had kept the Ruby Scarab. Inside was the costume he had worn as the Scarlet Scarab, a journal of his exploits, and a photo of the ruby. Mehemet considered it his duty to continue his father's quest, searching for years as his father had. Finally, Mehemet came to the gem's final resting place. Holding the ruby, he gained the powers of the Scarlet Scarab, and set out to become Egypt's new champion. One of his goals was the protection of Egypt's priceless ancient artifacts. In one mission to recover some stolen artifacts, the Scarlet Scarab encountered Thor, who mistook his intentions and the two fought to a standstill.  Once they realized they were on the same side of Justice, they worked together to retrieve the stolen artifacts. 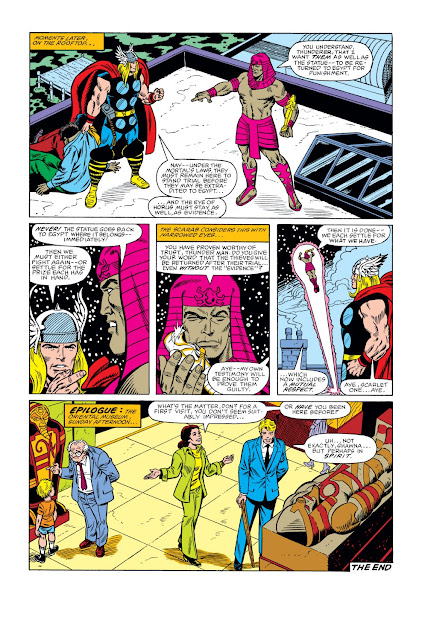 Posted by Derf's Domain at 8:56 PM No comments: 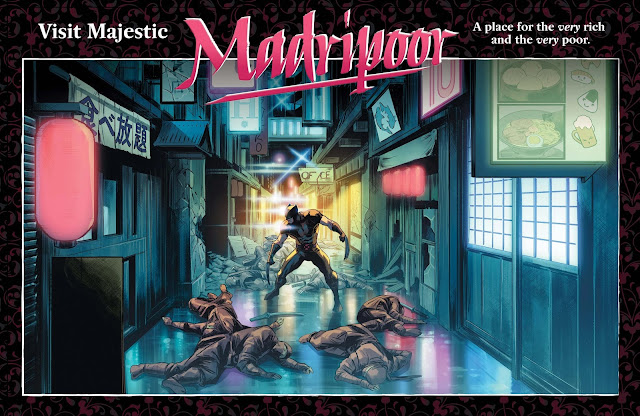 Justice League vs. The Legion of Super-Heroes #3

The Kill Lock: The Artisan Wraith #3

Posted by Derf's Domain at 9:55 PM No comments: