It's the return of Saturday Showcase.  I do apologize for my absence, but Spectrum went down due the constant rebuilding we face in the state of Louisiana ever since Hurricane Ida crossed or shores.  Anyway, I'm back and it is still the month of October so I wanted my showcase to focus on a hero or villain that could be associated with the holiday of Halloween and I came up with Baron Blood.  He has been a thorn in the Avenger's side ever since his creation in 1976.  Without further hesitation, let us dig in the history of one Baron Blood. 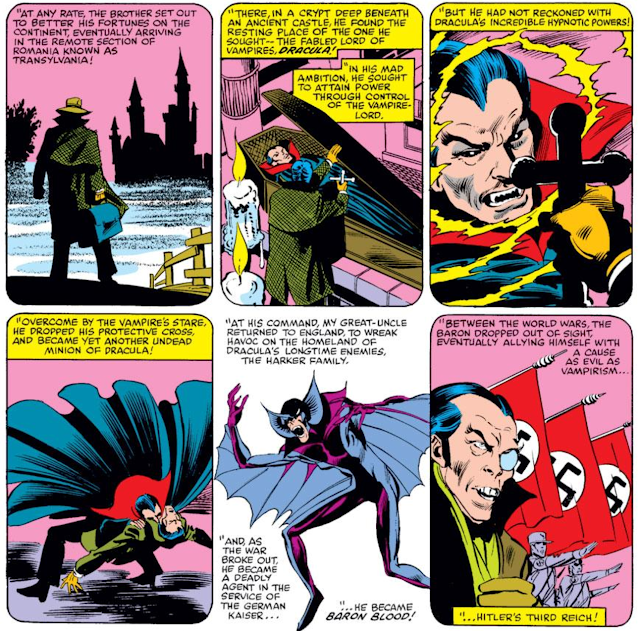 There are several people that have gone by the name Baron Blood, but I want to focus on the one that I was introduced to as a child.  His name is John Falsworth and I, like many, was introduced to him in the 7th issue of the Invaders series from Marvel Comics.

When we first meet John, he is  posing as the son of the first John Falsworth, it is revealed in flashback that the character is in fact the original, made possible due to the fact that he is now an ageless vampire.  You see, when the family fortune is left to his older brother James, John Falsworth leaves England to pursue an interest of his - vampire lore. Falsworth travels to Transylvania and encounters the original vampire lord Dracula, who, after overpowering Falsworth, drains his blood and turns him into one of the undead.  Dracula then commands Falsworth to return to England and cause havoc in revenge for the deeds of his former opponent Jonathan Harker. Adopting the alias of "Baron Blood", John allies with Germany during World War I and without either party realizing the identity of the other, battles his own brother, who is now the English hero Union Jack.  Blood is wounded by Jack with a silver dagger, and flees to recover. 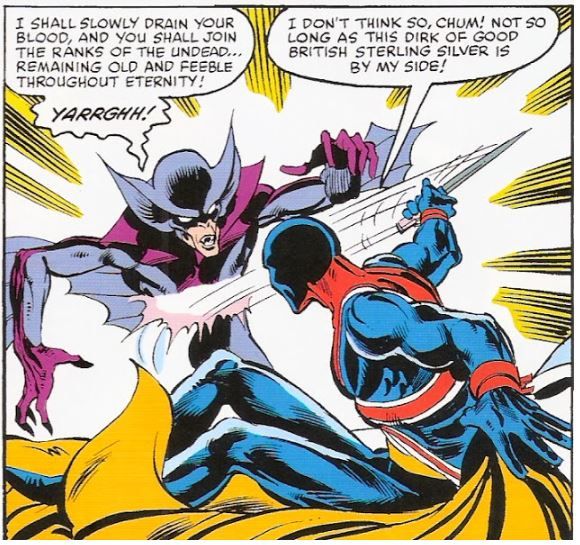 Baron Blood reappears during World War II, and once again aids Germany, with Nazi technology helping him to reduce his susceptibility to sunlight. As Blood, Falsworth attacks and wounds his niece, Jacqueline Falsworth, but is driven off by the android Human Torch. Almost dead due to blood loss, Jacqueline Falsworth is saved when given a blood transfusion by the Torch. The artificial blood causes the character to develop superhuman abilities, and she becomes the heroine Spitfire. Blood captures Spitfire and takes her to a cavern below Falsworth Manor, and cripples his brother by breaking his legs with a boulder. Blood is then impaled through the back and chest by a silver-laced stalactite.  Leaving him dead...for now. 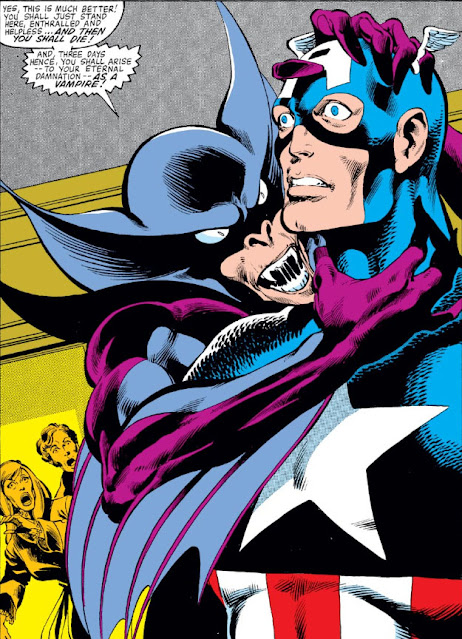 Baron Blood possessed all the powers of a vampire, including superhuman strength and durability; hypnotism and the ability to command bats; wolves; dogs; rats and mice.

Weaknesses included vulnerability to sunlight, garlic, and silver; the presence of religious symbols; decapitation and a wooden stake through the heart.

Courtesy of Nazi science, Blood received treatment that allowed him activity in sunlight, at least for some length of time, although this also prevented a vampire's traditional shape-changing powers (into a bat or wolf) from working. His transformation into a vampire also somehow activated an apparently latent psionic ability of self-levitation, which enabled Blood to fly without having to change into a bat.